After a Lifetime on Jacksonville’s Docks, Meet Charles Spencer

You are here: Home1 / News2 / After a Lifetime on Jacksonville’s Docks, Meet Charles Spencer

After a lifetime on Jacksonville’s docks, this college dropout tries to help others go to school 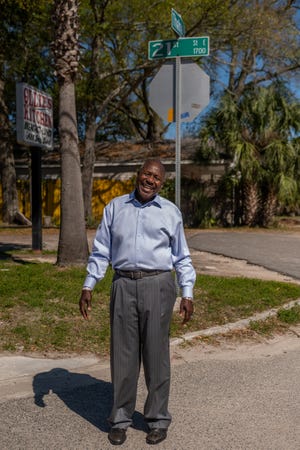 Charles Spencer, the ninth of 10 children, grew up four blocks from the Talleyrand docks in a wooden shotgun house resting atop brick piers.

Jacksonville’s port was smaller then and security just about nonexistent, and nobody minded that he and the neighborhood kids would go play there and grab the occasional orange or grapefruit just in by boat.

It’s not as if they had any parks to play in, after all.

Nobody in Spencer’s large family worked at the docks, but he went ahead and got a job there anyway at 19, where the older men there called him “Jitterbug.”

He didn’t expect to stay long, but he found he liked working the crane. He was good at it, stacking big container boxes atop each other from his controls. He would have worked for free, he said. Good thing they didn’t know that.

And life takes its twists and turns.

Spencer has another passion that drives him: a scholarship fund he started 26 years ago, beginning with $20,000 from fellow union workers.

Over the years, after recruiting a variety of sponsors, the International Longshoremen’s Association’s Scholarship Fund has given out more than $1 million to help students pay for college.

Spencer’s proud of that, especially as he is someone who dropped out of college three times — Bethune-Cookman once, Edward Waters twice — yet sent three of his children all the way through school.Create Account

He struggled to pay for their educations, but it was worth it, he said.

“I’ve got an honorary degree, but they’ve got degrees they earned,” he said. “These days and times, you need a college education.”

He said he doesn’t want anyone else to struggle to get that step ahead. And if he can help, he can.

“To me, you haven’t made it, you’re not successful, if you don’t help nobody else. You could have a zillion dollars. Howard Hughes, richest man ever lived, or one of the richest men, but he still died! And all that money and everything was left here, right?” Spencer said. “Howard Hughes! But if you do something to help somebody while you’re going along, then your life probably wouldn’t have been in vain.”

‘He believes in his community’
This last year, despite having to cancel its annual fundraising golf tournament because of the pandemic, the fund awarded nearly $30,000 in scholarships to 18 area high school seniors and college students.

The scholarship fund plans to hold a tournament, its 25th, this year. It’s scheduled for May 3 at Hidden Hills Golf Club. For more information visit Ilascholarshipfund.org.

Jadene King, executive director of the ILA Scholarship fund, has worked with Spencer for years.

“Charles is motivated,” she said. “He’s a giver. He believes in his community … I think he gets joy just watching others getting helped.”

Spencer just figures he’s been fortunate with where life has taken him.

“You don’t go around but once in life,” he said. “I look at where I was, and where I am today. That boy comes from the Eastside of Jacksonville and now lives in Queens Harbor, the only yacht-country club they’ve got there.” He chuckled. “That’s a good leap.”

Charles Spencer stands at the corner of East 21st and Thelma streets, where he lived as a boy, just four blocks from the Talleyrand docks where he made his living.

After coming home from the Army, his oldest brother bought the family a house around the corner, bigger than the other one, and they moved on up to Buckman Street.

At this memory, Spencer jokingly invoked the theme song from “The Jeffersons.” It was kind of like that, he said.

He went on to play football at Matthew Gilbert High School and still has a class ring for winning the state championship. He was a pretty good wide receiver, but there was one problem.

Hayes, who went on to Olympics and NFL fame, had wide receiver pretty well locked up, so Spencer was switched to guard. He was good enough that he got college scholarship offers, but he didn’t stick for long on campus.

A brother talked him into applying at the post office, and he got a job there sorting mail, with government benefits. But that wasn’t for him.

So he went to work at the port. “I was making what I thought was a stop, just until I could get my head straight on what I really wanted to do,” he said.

He liked the challenge of it, the logistics. And he liked being the guy in the control booth of the crane, where so much depended on him.

Same thing with the union — “I’m in that seat all by myself. You’ve got the other officers around, but the buck stops with you.”

It is, he said, what everything in life, beginning in that shotgun house on East 21st Street, prepared him for.

“You have to find your destiny in life, what’s your calling,” Spencer said. “This is my calling.”

Consider this, he said: Twice a dropout from the school, he is now on the board of trustees at Edward Waters College.

“That’s not the way it’s supposed to be,” he said, laughing. “Most people are Dr. This, Professor That. I’m just Charles Spencer.”

This site uses cookies. By continuing to browse the site, you are agreeing to our use of cookies.

We may request cookies to be set on your device. We use cookies to let us know when you visit our websites, how you interact with us, to enrich your user experience, and to customize your relationship with our website.

Click on the different category headings to find out more. You can also change some of your preferences. Note that blocking some types of cookies may impact your experience on our websites and the services we are able to offer.

These cookies are strictly necessary to provide you with services available through our website and to use some of its features.

Because these cookies are strictly necessary to deliver the website, refuseing them will have impact how our site functions. You always can block or delete cookies by changing your browser settings and force blocking all cookies on this website. But this will always prompt you to accept/refuse cookies when revisiting our site.

We fully respect if you want to refuse cookies but to avoid asking you again and again kindly allow us to store a cookie for that. You are free to opt out any time or opt in for other cookies to get a better experience. If you refuse cookies we will remove all set cookies in our domain.

We provide you with a list of stored cookies on your computer in our domain so you can check what we stored. Due to security reasons we are not able to show or modify cookies from other domains. You can check these in your browser security settings.

We also use different external services like Google Webfonts, Google Maps, and external Video providers. Since these providers may collect personal data like your IP address we allow you to block them here. Please be aware that this might heavily reduce the functionality and appearance of our site. Changes will take effect once you reload the page.